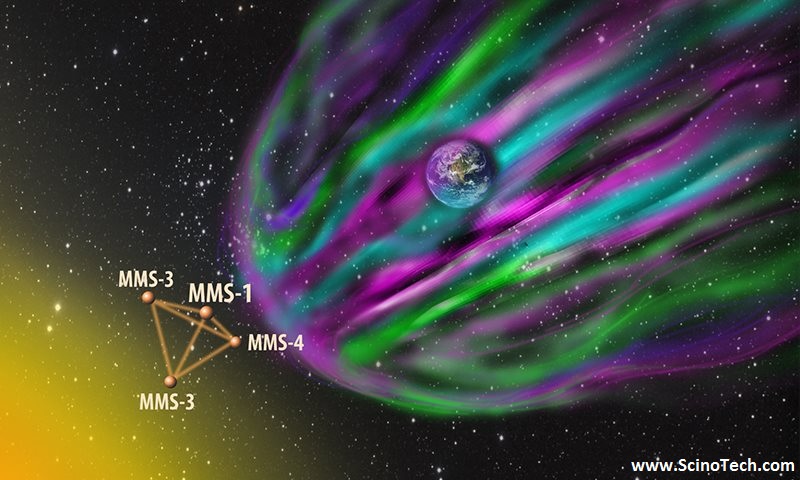 Researchers at the Swedish Institute of Space Physics have used measurements from NASA’s MMS Magnetospheric MultiScalesatellites to reveal that there are ripples, or surface waves, moving along the surface of shocks in space. Such ripples in shocks can affect how plasma is heated and are potential sites of particle acceleration. These results have been published in the latest issue of Physical Review Letters.

The MMS mission consists of four identical spacecraft that orbit Earth close to each other.Occasionally the satellites encounter a shock wave that forms when a fast wind of charged particles
from the Sun slams into Earth’s magnetic field .

Most visible matter in the Universe consists of ionized gas known as plasma. Shock waves in plasmas form around planets, stars and supernovas. Shocks in space plasma are efficient particle accelerators. Shocks in supernova explosions are thought to be the main source of cosmic rays – very high energy charged particles from space.

The details on how particles are accelerated and how plasma is heated at shocks in space plasmas are still unclear. The shock waves are usually considered planar surfaces but numerical simulations have previously showed that ripples can form on the surface of shock waves. The elusive ripples have been hard to study in space due to their small size and high speed.

Researchers at the Swedish Institute of Space Physics (IRF) in Uppsala, shows that these ripples do in fact exist in the Earth’s bow shock. The study uses the newly launched MMS mission to study the shock in unprecedented detail.

Theorized by Einstein, gravitational waves are finally observed in the merger of two black holes.

Two black holes rotate around each other before merging. The closer they get, the faster they spin. The energy from their spiralling and merger releases energy in the form of gravitational waves, or ripples in spacetime.
Enormous energy:

The result of the merger is a bigger black hole, though it’s less massive than the two combined black holes. The equivalent of three solar masses is converted into energy, in the form of gravitational waves.

“With the new MMS spacecraft we can, for the first time, resolve the structure of the bow shock at these small scales,” says Andreas Johlander, PhD student at IRF, who led the study.

The results are of importance to the broader field of astrophysics where these ripples are thought to play an important role in accelerating particles to very high energies. The structure of the shock wave also determine how plasma is deflected and heated at shocks.

“These direct observations of shock ripples in a space plasma allow us to characterize the physical properties of the ripples. This brings us one step closer to understanding how shocks can produce cosmic rays,” says Andreas Johlander.

« Why Tata not richest Ambani & Adani are richest