How are black holes formed? 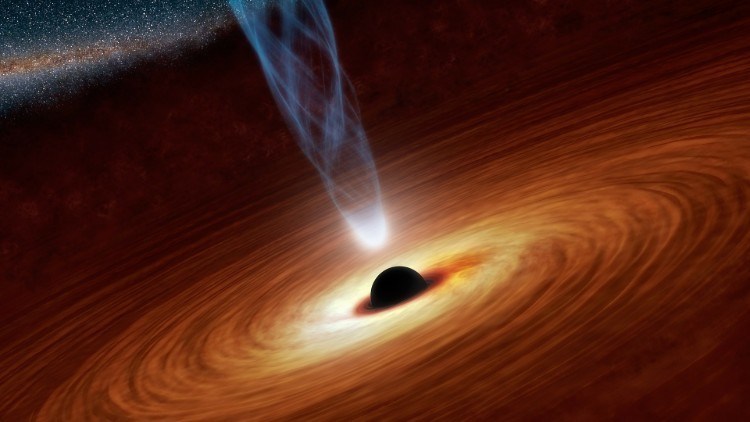 If you could squash the Earth into a ball the size of a marble, it would become a black hole. What are these mysterious entities?

Black holes are peculiar objects with many strange properties, but most books and articles have emphasised their exotic aspects, and obscured their fundamentally simple nature.

How are black holes formed?

Astronomers believe that one of only three things can happen to a star once it has burned out of fuel, depending on its mass. A star less massive than the Sun collapses until it forms a ‘white dwarf’, with a radius of only a few thousand kilometers.

If the star has between one and four times the mass of the Sun, it can produce a ‘neutron star’, with a radius of just a few kilometers, and such a star might be recognised as a ‘pulsar’. The relatively few stars with greater than four times the mass of the Sun cannot avoid collapsing within their Schwarzschild radii and becoming black holes. So, black holes may be the corpses of massive stars.

Most astronomers believe that galaxies like the Milky Way were formed from a large cloud of gas which collapsed and broke up into individual stars. We now see the stars packed together most tightly in the centre, or nucleus.

It is possible that at the very centre there was too much matter to form an ordinary star, or that the stars which did form were so close to each other that they coalesced to form a black hole. It is therefore argued that really massive black holes, equivalent to a hundred million stars like the Sun, could exist at the centre of some galaxies.

First image of a black hole

The image was taken by the Event Horizon Telescope, an array of radio telescopes arond the world designed specifically to capture an image of a black hole. This particular black hole is 500 million trillion km away from Earth.

What is a black hole?

If a ball is thrown upwards from the surface of the Earth it reaches a certain height and then falls back. The harder it is thrown, the higher it goes. If thrown hard enough it would eventually leave the atmosphere and keep on going. But if we increased the force of gravity, the object would have to be travelling faster and faster before it could break free.

If the Earth was compressed to the size of a ball with a radius of 9mm, its gravity would be sufficient to prevent even an object travelling at the speed of light to escape. In the case of the Sun, the Schwarzschild Radius, as it is known, would be just under 3km.

If even light energy does not travel fast enough to escape (and nothing can travel faster), then no signals of any kind can escape and the object would be ‘black’. The only indication of the presence of such an object is the pull of its gravity. Away from the surface this is just the same as if an ordinary object of the same mass were there. The presence of gravity means that objects can fall into it, and hence ‘hole’.

So, a black hole is an object so compact that the escape velocity from its surface is greater than the speed of light.

How could we see a black hole?

Because black holes are small, and no signals escape from them, it might seem an impossible task to find them. However, the force of gravity remains, so if we detect gravity where there is no visible source of light then a black hole may be responsible.

This type of argument, by itself, is not very convincing, and so we must look for other clues. If there is other material around a black hole which might fall into it, then it will. There is then a good chance that as it falls it will produce some detectable signal not from the black hole itself, but from just outside it.

Things are rather different if there is a massive black hole in the centre of a galaxy. It is possible there for a star to be swallowed by the black hole. The pull of gravity on such a star will be so strong as to break it up into its component atoms and throw them out at high speed in all directions. Some of the fragments will fall into the hole, increasing its mass, whilst others could produce an outburst of radio waves, light and X-rays.

This is just the behaviour which is observed in galaxies of the type called ‘Quasars’ and may well be happening in a milder way in the centre of our own Milky Way.

Astronomers from the Royal Observatory were part of a team who found that the galaxy NGC 4151 contains about 1000 million times the mass of the Sun, concentrated in a nuclear region whose diameter is no more than 4000 times the distance between the Earth and the Sun. The most plausible explanation at present is that most of this mass is in a black hole at the centre.

Most of what we know about black holes today is because of Stephen Hawking. The renowned scientist used Albert Einstein’s theory of relativity to create a more solid theoretical mathematical backing to black hole theory. Hawking died on 14 March 2018 but his impact on science and on our understanding of black holes is huge.

« Dating sites as a way to find a soul mate

When is the next transit of Mercury? »